This is a Street and Sidewalk Petition Project approved by City Council on 9/01/2015.  The proposed improvements will upgrade Lorimer Road to current standards with 2-lane curb and gutter section.  The street’s ultimate section will entail a 27’ wide section from back of curb to back of curb, a 5 ft. wide sidewalk on the west side with mainly 6’ setback, replacing the existing bridge over Bushy Creek with two concrete box culverts, add new driveway aprons and matching existing driveway surface material, improve area drainage by eliminating swales and collecting and conveying stormwater runoff in underground drainage system, grading, restoration and other appurtenant works.  The project is scheduled to be bid in May and the construction to start in August 2018.  Project completion is anticipated by end of 2019. Efforts have been unsuccessful to obtain needed easement from the following property owners; therefore it is recommended that a resolution of condemnation be authorized.

Property to be condemned: All easements and/or other interests in the property of the above-named project as shown on an exhibit prepared by: City of Raleigh Engineering Services Department Survey Section and entitled “Permanent and Temporary Construction Easement Acquisition Exhibits for the City of Raleigh” such easements and/or other interest identified and listed in the back up information associated with this request.

One side only, according to Upchurch, “mainly for cost.” So, what are some of the other reasons?

The City’s Stormwater Report found that the project will create additional stormwater problems, but that the increased runoff caused by introducing more concrete and pavement on Lorimer Road could be minimized “by putting sidewalk on one side only.”

—Did stormwater concerns influence the decision to put the sidewalk on only one side of the street? If so, how is that fair to the 90% of residents who, according to the City’s official Stormwater Report, don’t have any stormwater problems?

—Was the west side of the street chosen because that’s the side that will best minimize the impact of additional stormwater runoff caused by the project?

—Was it chosen because the west side is the side of the street Woodlinks Drive is on, a road also getting a sidewalk as part of the Lorimer Road project? Jimmy Upchurch made reference to “the gentleman [Woodlinks resident Justis Peters] who requested we carry [the sidewalk] onto his property” during his presentation to Council.

“Justis Peters, 1315 Lorimer Road, spoke in support of the improvements. He questioned however if it could be amended to add sidewalks down the side of his property on Woodlinks. He stated he owns the majority of the frontage on Woodlinks and if the sidewalk could be extended to make it a complete sidewalk the people along Fairway Ridge would benefit.” —from City Council Meeting Minutes, 9/1/2015 [Note: Donna Burford, the Lorimer Road petitioner, lives on Fairway Ridge Drive; neither Peters nor Burford will be assessed for either project]

Please clarify Ms. Crowder’s motion in regards to Mr. Justis Peters request last night for us to extend the proposed sidewalk installation on Lorimer around his side yard on Woodlinks to connect to the existing sidewalk that stops at his property line.

Her motion was to approve the improvements with the change that sidewalk will be reduced to 5 ft. – Sidewalk from Kaplan to Garland.  In staff this am there was discussion about adding the Peters property.  Tom said that could not occur without going through the entire process again but suggested to Rich that if Mr. Peters was willing to pay for the project that maybe we could enter into a contract to add the improvements to his property to the contract.

Donna Moll Burford posted the following on Facebook on September 2, 2015:

“Fairway Ridge was developed after this area was considered part of the City of Raleigh, so curbs and gutters were installed. Maybe being that ít is a dead end road, they weren’t required to put sidewalks running the whole length. But there is sidewalk running half way down Woodlinks Drive that connects our homes to Lorimer Rd. We got approval to include the continuation of that sidewalk down to Lorimer as part of this project.”

—Who are “we?” Also, the approval for the Woodlinks Drive project did not occur until November 3 (see below), yet this Facebook post is dated September 2. 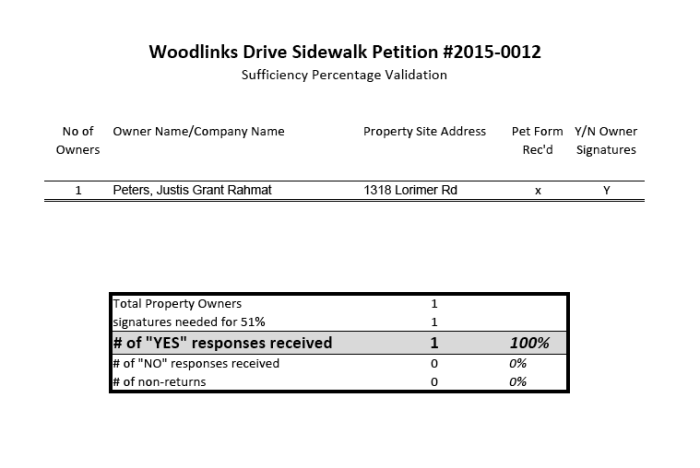 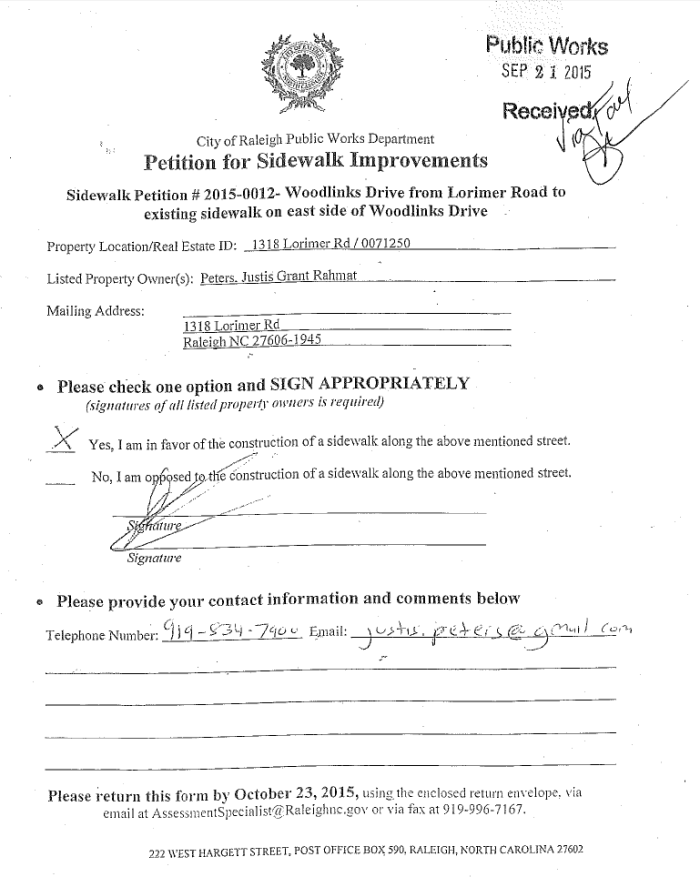 The following sidewalk petition has been received and signed by a majority (50 percent plus one) of the adjacent property owners as required by the City’s Residential Sidewalk Petition Policy.

Funds are available in the Sidewalk Petition Program for design and construction.

Recommendation:  Schedule a public hearing for November 3, 2015.  Upheld on Consent Agenda Odom/Stephenson – 6 ayes.  (Maiorano absent and excused/Baldwin had not arrived at the meeting).

This was a hearing to consider a petition signed by 100 percent of the property owners to install a sidewalk on the east side of Woodlinks from Lorimer Road to the existing sidewalk, which is an approximate distance of 217 feet at an estimated cost of $21,700.

Following the hearing, the Council may take action on the request.

The Mayor opened the hearing no one asked to be heard thus the hearing was closed.  Ms. Baldwin moved approval as outlined.  Her motion was seconded by Ms. Crowder* and a roll call voted in all members voting in the affirmative.  The Mayor ruled the motion adopted on an 8-0 vote.

* It was the other way around at the September 1 Council Meeting when the Lorimer Road decision was made: Crowder moved for approval, Baldwin seconded.

Slide were generated by the City of Raleigh to show the length of the petitioned-for project—from Kaplan Drive to Garland Drive. Slide #1 is captioned “Lorimer Road from Kaplan Drive northward toward Woodlinks Drive.”

A video of the 9/1/2015 evening session is HERE. Complete Council Meeting Minutes are HERE.

The City Council of the City of Raleigh met in a regular reconvened session at 7:00 p.m. on Tuesday, September 1, 2015 in the City Council Chamber, Room 201 of the Raleigh Municipal Building, Avery C. Upchurch Government Complex, 222 W. Hargett Street, Raleigh, North Carolina, with all Council members present:

Mayor McFarlane called the meeting to order and the following items were discussed with action taken and shown.

This was a hearing to consider the construction of Lorimer Road to a 27-foot, back-to-backstreet section with six-foot-wide sidewalk with a six-foot setback on the west side and a 3.5-foot shoulder on the east side including curbs, gutters, and drains from Kaplan Drive to Garland Drive, with assessments to apply at the current rate of $32 per linear foot. The hearing is pursuant to a petition, which was signed by 68.29 percent of the abutting property owners which represents 70.96 percent of the abutting linear feet of frontage.

The Mayor opened the hearing.